A level of pretentiousness that never fails to astound

IT’S autumn. I’ve spent my evenings watching a bunch of people I wouldn’t want to ever work with (for the most part) arguing and trying to look like they, above everyone else, knows what they’re doing. In can only mean one thing… The Apprentice is back on the TV. Week one, and we we’ve already had three people fired.

The Apprentice wannabees – for henceforth to be known as the Sugarbabes – never fail to disappoint. Their level of ineptitude on occasion is astounding.

Week one and the Sugarbabes were given the task of selling a load of stuff. Simple as that. There was sausages, T-shirts, potatoes and various other bits and pieces, including about £200 worth of cleaning equipment. Cut to scene where the girls’ team – who chose the incredible name of Team Decadence, which Sir Alan rightly pointed out didn’t really give the right impression – for some reason chose to try and sell the cleaning equipment to London Zoo.

Now, if I was ever in the position where I had a load of sponges, wipes, cloths, mops and buckets – and given just 48 hours to sell it – the zoo would be very far down my list of potential buyers. Car garages. Yes. Cleaning companies. Yes. Hotels. Yes. Taxi companies. Yes. Dudley Zoo…. er no. What were they expecting, that the zoo staff would get a couple of hundred quid out of the tills to pay for a few dishcloths in order to rub down the elephants?

And then we got the men’s team spending a fortune, and wasting loads of time, on ingredients to turn the sausages into ‘gourmet hot-dogs’. Gourmet flipping hot-dogs…. I’d pay an extra pound to not have it liberally pasted with artichoke guacamole or whatever it was they decided constituted gourmet. Result, they missed ‘lunchtime’ sales…

And these are people who, according to their CVs, are experts in sales, marketing gurus or business leaders of the future. Their level of pretentiousness is always incredible. I know it’s the BBC sound-bites that are chosen to make them look so, but when you hear them at the start of the show spouting about how they’re the best thing since sliced bread (which always strikes me as a strange saying, bearing in mind all the things invented since sliced bread) you end up willing them to fail.

Day two of the week-one double-header, and we see the Sugarbabes set the task of inventing and selling some ‘wearable technology’. And what do the boys’ team invent, a jumper with a camera on the front… how sinister is that? How happy would you be if you were out and about and someone’s jumper was videoing you? It’s the sort of thing riot police might wear in order to gather evidence. It’s not the sort of thing you’d wear in the park unless you wanted an unwanted reputation.

Still, say what you like about The Apprentice, it makes good TV, if only for Nick Hewer’s facial expressions in the background. If I was a candidate I’d just watch him, and every time he grimaced I’d know it was a bad move.

What does it actually mean?…. Bio-plastics 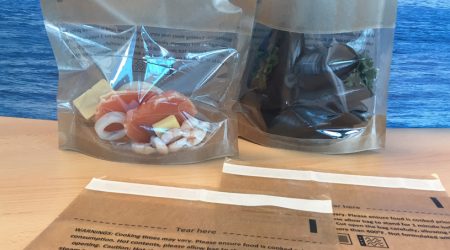 Fruit packaging under the microscope at Fruit Focus