MEDICAL & HEALTHCARE: Health Minister visits to discuss NHS procurement – his first to a UK manufacturer in the healthcare sector

MINISTER of State for Health Philip Dunne visited Sirane and Enaris yesterday (Thursday) to find out for himself the experiences of a UK manufacturer selling into the NHS.

Mr Dunne, MP for Ludlow, has responsibility for areas including NHS procurement, and the government minister was keen to discover Enaris’ experiences.

It has his first ministerial visit under ‘procurement’ and his first to a UK manufacturer as health minister – and one which he found to be ‘hugely valuable’. He later tweeted “Impressed by innovation in cost efficient absorbent products for medical use developed and manufactured by @SiraneLtd SME in Telford.”

Simon Balderson, group MD, said: “Having recently been successfully in securing a NHS Framework agreement via NHS Supply Chain for the supply of an anti-slip absorbent floor mat, we had an open and frank discussion about ‘selling to the NHS’.

“Anyone who’s ever been involved with selling anything into the NHS will understand the complexity involved, and the challenges faced, and Mr Dunne was interested to hear from a UK manufacturer how they have found those obstacles.

“He was also keen to stress that changes are afoot which will alleviate many of the issues manufacturers are currently battling against when selling to the health service.

“I think the Minister was also genuinely interested to hear about an innovative company which from small beginnings is now selling to more than 70 countries.”

Discussions also included Brexit – and the impact it has had on the company, both positive and negative, as well as Sirane’s future expansion plans.

Mr Dunne was then given a tour of the factory by Simon and Enaris MD, Jeremy Haydn-Davies, where he could see some of the products in question being made.

Enaris is the new name for Sirane’s medical and healthcare division.

Enaris was launched in March to service medical, laboratory, dental, care-home, emergency and veterinary sectors. It has drawn on Sirane’s expertise in areas including absorbency and material science – as well as from listening to the needs of the healthcare industry – to create a varied  portfolio of products. 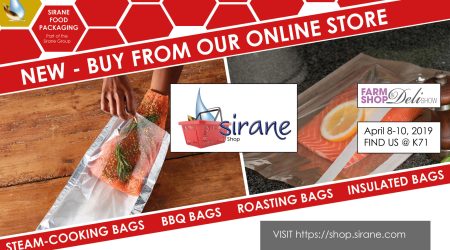