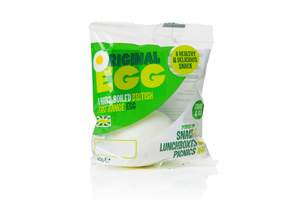 EAT eggs in the office at lunchtime and the chances are you won’t be too popular – well technology first developed by Sirane for meat has proved a bonus for egg-lovers.

Eggs, like some packaged meats, suffer from confinement odour – which can be off-putting for both the consumer and others around when the product is opened.

However, an absorbent patch developed by Sirane for vac-packed lamb has enabled a unique snack egg to be brought into the food-to-go market without any off-putting smells.

The Original Egg Company, a new niche brand under the Stonegate family, last month launched the Snack Egg – a single portion shelled hard-boiled egg convenient for people who want to eat ‘on the go’ – with Waitrose the first to put it on their shelves.

It’s not just the product that is unique; a bespoke and innovative flow wrap packing machine means the BRC standard British free range eggs are individually wrapped within minutes of being cooked, offering the best possible shelf life for the consumer.  The company has also worked with Sirane to develop an absorbency patch.

Jeremy Haydn-Davies, Sirane sales director, said: “This is the first time this patch has been used for eggs and means that once opened the Snack Egg smells just as you would expect of a freshly boiled egg. The patch absorbs all confinement odours, meaning when the customer opens the pack it smells as fresh as the moment it was packed.

“The patch could have numerous other uses – it could be used in egg sandwich packs for example, which could be good news for cramped offices all around the UK.

“This product was originally developed as an odour absorbent pad for vac-packed lamb, which suffers from a significant confinement odour problem, and can also be used for other meats and fish. The ‘egg problem’ though allowed us to develop a small patch in a reel format for products which solely need to address an odour issue.”

Trials on an absorbent pad made by Sirane revealed a substantial 9% drop in vac-packed meat being returned by consumers to one major UK supermarket. Returns are a significant issue for vacuum-packed meats such as beef, poultry, lamb, gammon and pork – as unpleasant odours can cause customers to wrongly think food is off.

Simon Balderson, Sirane’s managing director, said: “Although vacuum packaging is an effective way to provide shelf life at low cost, the odour released from the pack when it is opened has proven to be a major obstacle to its acceptance in the market.

“The odour, known as ‘confinement odour’, is sometimes compared to that of sour milk or cheese. On occasions, particularly for meat with higher pH, the odour can be sulphurous.

“Although the odour does not indicate that the meat is unsuitable for consumption, consumers are understandably alarmed and often return the product to the retailer.

“It’s great that in solving a problem within the lamb trade we’ve also managed to help out those people who want to open up eggs for lunch without upsetting colleagues.

“Stonegate saw that the application we’d developed would also work for them, and I’m sure there are many other food manufacturers who’d benefit from this technology.”

The Original Egg Company plans to roll it out in to other retailers later this year along with a range of speciality ready-to-eat egg products. Maria Paice, managing director, said: “We have drawn on generations of experience to offer fresh and bespoke ready to eat egg products and feel we have found a real gap in the market with our Snack Egg.

“The birds that lay our eggs are reared to the highest welfare standards, allowing us to pass on great tasting British free range ready to eat egg products.”

For more information on the Snack Egg, please visit www.theoriginaleggcompany.co.uk

For more information on Sirane, or to find out more about our odour-absorbing products, then either visit www.sirane.com, email jeremy@sirane.com or call +44 01952 230055.

Ugly fruits coming to a Swedish store near you…

What does it actually mean?…. Biodegradable 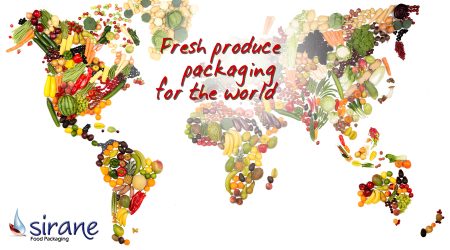 Still time to catch up with Sirane at Fruit Logistica